Reducing the region’s greenhouse gas emissions to contribute to national goals will require an ongoing movement toward the use of alternatively fueled vehicles and the infrastructure that supports them. That’s a conclusion we can draw from a greenhouse gas emissions inventory Pima Association of Governments recently completed, a new national focus on expanding electric vehicle use as part of a sweeping infrastructure plan, and PAG’s Alternative Fuels Corridor Deployment Plan for Interstate 10.

Nationally, there is a push for expanded electric vehicle use and infrastructure to reduce the country’s carbon emissions. “The future of the auto industry is electric. There’s no turning back,” President Biden said last month at Ford Motor Company’s release of a new electric F-150 pickup truck.

The administration’s proposed infrastructure plan calls for grants and incentives to add 500,000 EV charging stations throughout the country by 2030 to support emissions reductions.

Where and how to deploy those stations will be a community-scale challenge. Local, regional and state governments will need to embark on robust regional planning, and PAG is ahead of the pack with its Alternative Fuels Corridor Development Plan and the associated survey tool other regions also can use to aid planning.

Here in our region, PAG’s Greenhouse Gas Emissions Inventory shows 40 percent of our greenhouse gas emissions come from transportation sources. One way to reduce emissions is to convert some fuel use to lower-emissions sources.

The most common alternative fuel sources are electricity and compressed natural gas (CNG), though CNG is primarily used in fleets such as local government vehicles and in commercial-scale transportation. Sun Tran, for example, operates 223 vehicles, many of which are hybrid or biodiesel, and 45 are CNG-fueled buses.

The stretch of I-10 between Tucson and Phoenix is already optimized for electric vehicles, with sufficient available charging stations. But other sections of the state do not meet the optimal standard of having a maximum of 50 miles between electric vehicle direct current fast charge (DCFC) charging stations that are no more than five miles away from the interstate.

PAG’s Alternative Fuels Deployment Plan focused on the stretches of I-10 between California and Phoenix, and between Tucson and New Mexico.

“We’re trying to get the east and west sides of our state, the rural sections, into ready status from pending,” said Dustin Fitzpatrick, PAG’s air quality planning coordinator. Ready status means the charging facilities are in place and road signs can be added to inform drivers of the charging locations.

The plan shows that, to maximize the state’s posture with those considering converting to alternative fuel vehicles or those who have them and wish to travel through the Southwest, Arizona will need to add at least four more stations, Fitzpatrick said. The inventory shows those spots are Salome and Tonopah west of Phoenix, and Willcox and San Simon east of Tucson.

For most areas of the country, being ready to install alternative fuels to reduce carbon emissions means making a plan for how to do so and then having the consumer demand to support implementing that plan.

While PAG is ahead in having established the areas of the state that need charging infrastructure, the demand is still a challenge in Arizona. Without consumer demand, private fuel retailers are unlikely to spend the money to install the stations. But other parts of the infrastructure puzzle are beginning to take shape. For example, Tucson Electric Power Co. is supporting public charging station installation through rebates for commercial businesses that put in the Level 2 EV charging stations.

Another challenge is figuring out who is responsible for this planning and implementation. As a metropolitan planning organization, PAG can make plans, but it is up to federal, state and local governments to make policy or spend money to install the infrastructure.

Additionally, several states have passed clean fuel standards, following California’s lead, that initiate steps to increase the number of electric vehicles available to consumers and the charging infrastructure to support them. As other states see EV proliferation increase, the momentum may carry over to Arizona, with or without state policy behind it, Fitzpatrick said.

What others are doing

The federal government continues to support alternative fuel corridor development, and Transportation Secretary Pete Buttigieg recently announced another round of funding for such plans.

The Pacific Coast states have worked together to establish a West Coast Electric Highway that stretches from British Columbia to San Diego. The project includes charging stations at least every 30 miles and identifies major interstates and other routes that provide adequate charging access.

The City and County of Denver established a plan that includes increased EV adoption and relies on more charging stations to support it. Like PAG’s plan, Denver’s plan is focused on light-duty passenger vehicles that can plug in at roadside charging stations.

Locally, the City of Tucson has created an electric vehicle readiness roadmap that includes adding charging stations for employee commuter use and turning over the city’s fleet of light-duty vehicles to fully electric by 2030. 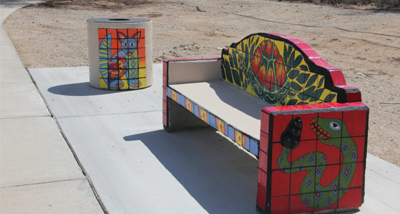